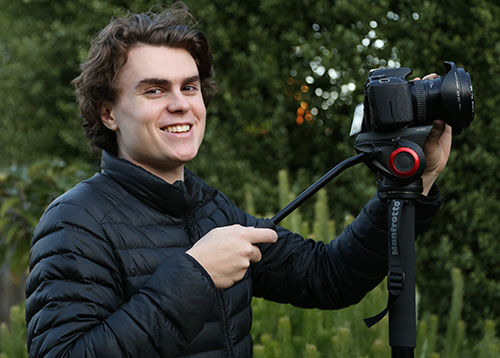 In my spare time I run the Technologetic YouTube channel, take interesting photos and videos, fly my quadcopter and hit the gym.

I want to help with your next digital project or event. Shoot me an email!

Working in the Managed Services team for Telstra Purple (formerly known as Readify), doing sustained engineering for a range of customers.

I founded Technologetic as a YouTube channel covering technology as an intersection of my love for technology, videography and public speaking. Since 2010 I've researched, scripted, filmed, presented, edited and published over 170 videos, with no end in sight! Recently I've begun using the Technologetic brand to offer videography, photography and other online media creation services to anyone. Find out more at technologetic.com.

After being heavily involved in the technical side of most assemblies, live music, plays & musicals and other live events during my time at Haileybury, I was employed to continue to provide AV support. This has also extended to corporate events suchs as launches or school open days across the four campuses in Victoria. It includes working in large teams on big productions, to working autonomously and discretely at corporate events.

Worked as part of a team at the box office, I primarily sold tickets and concession items. This role involved wearing many hats, from being a coffee barista in the morning, to a bartender at night, and a warm welcome and first port of call to cinema patrons throughout the day. I was also promoted to a supervisor role, managing up to ten staff at a time, handling large amounts of money and being ultimately responsible for customer satisfaction at any given time.

Worked on a project for Woodside energy, enabling multiple users across the internet to simultaneously view and interact with 3D models in the browser. In particular, this project was enabling collaboration and discussion between researchers in Melbourne, and gas pipeline teams in Perth.

Majoring in Computer Science while taking electives in journalism. Distinction average. Worked on an evacuation simulation tool for my honours thesis. Also completed several other research projects including a summer research scholarship. Involved in student mentoring.

Achieved an ATAR in the top 3% of the country while being involved in a huge range of extra-curricular activites including school leadership, debating, backstage crew and sports in my senior years of schooling. A highlight was receiving a Premier's Award for VCE Music Technology.